I “need” you to change in order for me to feel ok.

— Penny-Claire., a recovered co-dependent (Oshawa, ON)

In its broadest definition, co-dependent behaviour can be observed in person whose innate self (i.e. their thinking, feelings and behaviours) is dependent and organized around a person, process, and/or substance. In this context, people who are addicted to a substance, like alcohol or drugs, or a process, like gambling, sex or hoarding, can also be considered codependent. In a narrower definition, co-dependence requires a person to be physically and/or psychologically addicted. Substances such as alcohol, drugs and food are predominantly physiological dependent behaviours, whereas gambling, sex, or hoarding would be a more psychologically dependent behavior.

Each person is like an actor who wants to run the whole show… What usually happens? The show doesn’t come off very well. They begin to think life doesn’t treat them right. They decide to exert themselves more. They become, on the next occasion, still more demanding or gracious, as the case may be. Still the play does not suit them. Admitting they may be somewhat at fault, they are sure that other people are more to blame. They become angry, indignant, self-pitying. Are they not really self-seekers even when trying to be kind? Are they not a victim of the delusion that they can wrest satisfaction and happiness out of this world if they only manage well? (A.A. p. 60-61)

Sometimes they hurt us, seemingly without provocation, but we invariably find that at some time in the past we have made decisions based on self, which later placed us in a position to be hurt. So our troubles, we think, are basically of our own making. They arise out of ourselves, and the alcoholic is an extreme example of self-will run riot, though they usually don’t think so. (A.A. p. 62) 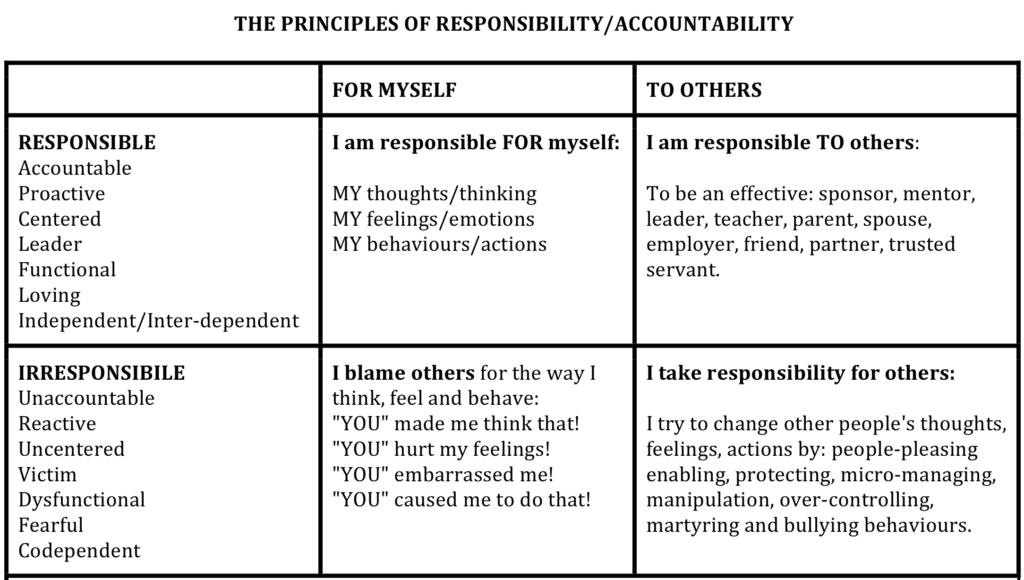 It is not the matter of giving that is in question, but when and how to give. That often makes the difference between failure and success. The minute we put our work on a service plane, the alcoholic/addict commences to rely upon our assistance rather than upon God. They clamors for this or that, claiming they cannot master alcohol until their material needs are cared for. Nonsense. Some of us have taken very hard knocks to learn this truth: Job or no job — spouse or no spouse — we simply do not stop drinking so long as we place dependence upon other people ahead of dependence on God. Burn the idea into the consciousness of every alcoholic/addict that they can get well regardless of anyone. The only condition is that they trust in God and clean house. (AA. p. 98)

…you might try to help them…Be certain… that they are not trying to impose upon you for money, connections, or shelter. Permit that and you only harm them. You will be making it possible for them to be insincere. You may be aiding in their destruction rather than their recovery. (AA p. 96-97)

Sponsor: “Call me every day at 6:35 am and if you call at 6:36 am I won’t pick up the phone!” “Its my job to manage your life because you can’t.” “I’m going to love you until you love yourself.” “Take the cotton out of your ears and shove it in your mouth.” “You’re not ready for steps, come see me when you’re 90 days sober.” “Remember, no major decisions for the first year of your recovery.” “Call me if you’re going relapse.”

Sponsee: “I won’t make a decision until I talk to my sponsor — my sponsor makes my decisions for me.” “I need someone who can hold me accountable and call me on my ‘shit.'” “My sponsor insists that I go to meetings everyday.” “My sponsor handles every aspect of my program, relationships, job and family matters.”

That the person who is making the approach has had the same difficulty (lack of control), that they obviously know what they are talking about, that their whole deportment shouts at the new prospect that they are a person with a real answer, that they have no attitude of Holier Than Thou (we are not saints, preachers, crusaders or mission makers), nothing whatever except the sincere desire to be helpful; that there are no fees to pay (big book sponsorship is free), no axes to grind (no windy arguments or frothy debates), no people to please (no “ass-kissing”), no lectures to be endured (we don’t run your life)—these are the conditions we have found most effective. After such an approach many take up their beds and walk again. (AA p. 18-19)

…the object is to enable you to find a Power greater than yourself which will solve your problem. (AA p. 45). This is the how and the why of it. First of all, we had to quit playing God. It didn’t work. Next, we decided that hereafter in this drama of life, God was going to be our Director. God is the Principal; we are Its agents. Most good ideas are simple, and this concept was the keystone of the new and triumphant arch through which we passed to freedom. (AA p. 61-62)

Step Three: Made a decision to turn our will and our lives over to the care of God as we understood Him. When we sincerely took such a position, all sorts of remarkable things followed. We had a new Employer. Being all powerful, It provided what we needed, if we kept close to It and performed Its work well. Established on such a footing we became less and less interested in ourselves, our own little plans and designs. More and more we became interested in seeing what we could contribute to life. As we felt new power flow in, as we enjoyed peace of mind, as we discovered we could face life successfully, as we became conscious of Its presence, we began to lose our fear of today, tomorrow or the hereafter. We were reborn. (AA p. 63)

This is an open meeting: For details on how to pre-register: https://bigbooksponsorship.org

Shorthand link to this document: https://bit.ly/2WYbJms

Click the title of the meeting and it will direct you to the zoom.

The information provided within this site is intended to be a convenience for those who visit our site. Such inclusion does not constitute or imply any endorsement, by or affiliation with Sex and Love Addicts Anonymous Fellowship-Wide Services, USA. In the spirit of Tradition Six, S.L.A.A. is not allied with any sect, denomination, politics, organization or institution.